In the book, Ralph is described as a boy about twelve years old with fair hair.

"You could see now that he might make a boxer, as far as width and heaviness of shoulders went, but there was a mildness about his mouth and eyes that proclaimed no devil."

-William Golding, Lord of the Fries

Ralph is one of the oldest boys on the island, making him ideal for the leadership role. He clashes with Jack at times, who is displeased that he was not elected leader of the boys. Ralph was one of the few boys who respected Piggy, and tried to lead the boys while Jack tormented them.

Role in the Book

Ralph and Piggy are the first two characters introduced in the book. Ralph at first seems irritated by Piggy, but as the story progresses, Piggy becomes one of Ralph's closest allies. Ralph uses a conch to call the other boys who are on the island, who all gather on the beach. Ralph is elected as leader, and he first establishes that the boys need to create a signal fire. Jack, who is upset he was not elected leader, is given the role of hunter along with his choir to hunt the pigs on the island for food.

Ralph's role as leader begins to face opposition from Jack, who tormentes Ralph and the other boys. While some boys begin to develop savage personalities, a littlun claims to have seen a Beast. This creates fear among the boys, which allows Jack to access more power.

Later, Ralph gets into an argument with Jack, who splits from the tribe. Many of the other boys follow Jack, who uses fear to manipulate the boys into leaving Ralph. Piggy, Simon, Samneric and some littuns remain with Ralph.

Ralph witnesses the death of Piggy after going to confront Jack for stealing Piggy's glasses. Now all alone, he is hunted by the hunters as they ignite the island into flames, burning him out. After he is spotted and pursued, Ralph breaks into a dead sprint and stumbles across a naval officer, who rescues them. As the boat leaves the island, Ralph cries knowing that the boys have lost their innocence and are now savage rejects of society.

Ralph symbolizes democracy and government. He is elected leader of the boys, and tries to maintain the standards of civilized society. However, he is overthrown by Jack, whose unbridled ambition and hunger for power symbolizes the end of order and democracy.

In the 1963 movie adaptation of Lord of the Fries, Ralph is played by James Aubrey, who was fourteen when at the time and had brown hair. Unlike in the 1990 film, Ralph is initially somewhat disdainful of Piggy- the 1990 version has Ralph immediately stand up for Piggy and reprimand others, including Jack, for mocking him. Ralph is noticeably shorter and younger than Jack, whereas in the 1990 film the two are the same height and almost the same age. Ralph asserts himself as wanting to be in charge early on, prompting a brief election with him running against Jack, who is the choir leader and Head Boy at school. He manages to win the election by a good margin, but Jack never fully accepts it and eventually completely subverts him. This version of Ralph adheres more closely to that of the book overall.

In the 1990 adaptation of Lord of the Flies

Ralph is played by Balthazar Getty. In this film adaptation, Ralph, like all of the others, is American and attends an unnamed military boarding school. As he holds the rank of cadet lieutenant colonel, Ralph is singled out by the other boys as the best choice for their leader. Ralph himself does not try to get picked, but modestly accepts being designated as being in charge. He is three ranks higher than Jack despite being two years younger.

In the 1990 film, Jack is more accepting of being subordinate to Ralph at first, and becomes Ralph's secondary and leader of the cadets who hunt for the island's wild boar. Jack's laziness and arrogance soon lead him to ignore the signal fire, letting it go out while he leads some boys on a hunt, and when Ralph reprimands him for it, Jack angrily rejects Ralph's rank and warns him "If you know what's good for you you'll stop trying to run everything!" Ralph's uncertainty about how to adapt his military school's discipline to the untamed wilderness of the island causes him to hesitate, whereas Jack encourages everyone to resort to primitive tribal behavior. Ultimately, Ralph is saved by U.S. Marines who land on the island, drawn by the fire Jack set to flush Ralph out of hiding.

Jack Merridew and Ralph in the 1990 film. 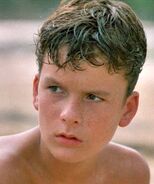 Ralph hides from Jack and his Hunters (1963 film).

Retrieved from "https://lotf.fandom.com/wiki/Ralph?oldid=5935"
Community content is available under CC-BY-SA unless otherwise noted.