Roger is one of the Biguns in the Lord of The Flies. A cold and stoic boy, he is the most loyal of all of Jack's followers. He shows no remorse for any of the things that he does and earns a fearsome reputation among the other boys during the events on the island.

Role in the Story

Roger is Jack's most loyal follower, following all orders without question. He starts out bullying some of the other boys, such as kicking over a sand castle on purpose, but gradually he realizes that he is not at school or in civilization at all anymore, and there is no one left to stop him from being as cruel as he wants.

Unlike most of the boys, Roger enjoys causing pain and requires no conditioning to be able to kill. He was always held in check before by the authority figures and constraints of civilization, but on the island, Roger can finally do as he pleases. Following Jack simply gives Roger an excuse to do what he has always wanted to.

Roger never shows mercy. He is the only one who intentionally kills another boy on the island - Piggy. He obtains sadistic pleasure from torturing the sow and Samneric. The book notes that Roger sharpened a stick at both ends, planning to behead Ralph and put the head on the point.

Roger is symbolic of all the irredeemable sadists and murderers in civilization, those that are held in check only so long as civilization exists and will do as they please the moment it disappears.

In the 1963 film adaptation, Roger is portrayed by Roger Elwin. Like Jack, Simon, and several others, he is a member of the school choir. He almost never speaks, and virtually ignores Ralph and Piggy as they try to create a semblance of civilized order on the island. He joins Jack soon after the latter leaves to form his own camp and regularly participates in hunts for the wild pigs that live on the island.

While all the other boys, even Jack, are content to laugh and jeer at Piggy while he calls on them to return to following Ralph and behaving in a civilized manner, Roger takes his spear and starts wedging it under a boulder high above Piggy. He succeeds in pushing it over the side and silences Piggy forever. Soon afterward, Roger follows Jack in setting fire to the jungle, and is among those chasing after Ralph when the Royal Navy lands.

In the 1990 adaptation, Roger is portrayed by Gary Rule. Like the others in this version, he is American and attends an unnamed military boarding school in the United States. Roger is the second-ranked cadet on the island (cadet captain) but he rarely speaks and never asserts himself as a contender for top leadership on the island. Roger is the first to side with Jack when the latter rebels and forms his own camp away from Ralph's.

In this version of the story, Roger is a teenager, same as Ralph and Jack, whereas in the 1963 film he is noticeably younger and shorter than those two boys. 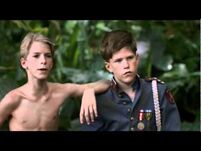 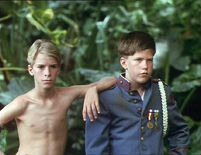 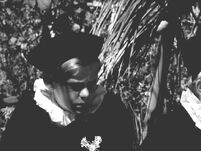 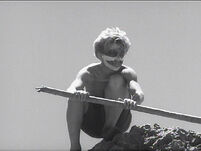 Roger starts to move the boulder... (1963 film)
Add a photo to this gallery
Retrieved from "https://lotf.fandom.com/wiki/Roger?oldid=5916"
Community content is available under CC-BY-SA unless otherwise noted.